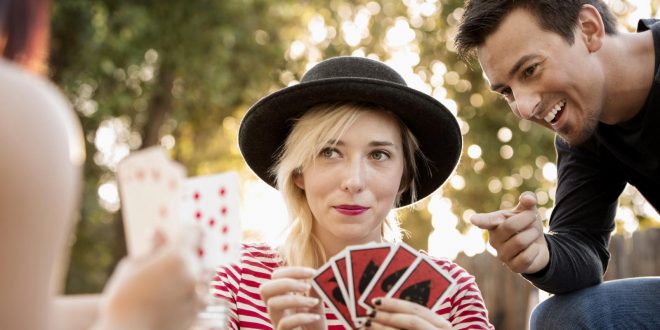 Robert Jordan December 4, 2022 Card Games Comments Off on The Most Popular Card Games to Play With Family or Friends

You might not know this, but card games have existed in a wide range of forms for thousands of years now. They were invented in the Far East, they came to the West by trading, and during the 1400s, the French people actually created the 52-card deck with the famous four suits that we use today.

Although different nations might use different sets, the general system is widespread all around the globe. For centuries, cards have been a means for families and friends to gather together and enjoy a game of cards.

If you love cards or if you are a newbie, this article will help you learn what are your options when it comes to the most popular games out there. Let’s take a closer look at the games:

Yup, you have guessed it right. Poker is known as one of the best and most played card games of all time. When someone says “poker”, you probably think about casinos, money, and James Bond. The winner of a poker game is decided by the combination of their obtained cards.

Every player gets a specific number of cards, they place bets on the cards they get but only if the player thinks their combination is the highest. The game finishes when someone asks for a show and this is when all players show their cards and see whose combination is the best.

There are various variations of the game which allows you to easily mix things up a little bit and change the game style as you wish. In the US, poker is not viewed as a card game, but it is viewed as a sport. People tend to take the game quite seriously, and by playing it, you can gain a lot of admiration and respect, as well as show people that you are good at playing it.

Now, this is perhaps the most complex and difficult one on this list. This game requires four people to split into 2 teams. The people who are in the same team need to face each other, the cards will be dealt a few times throughout the game.

You can choose from two other types of this game, including the Duplicate and Rubber Bridge. People will be required to bid and score maximum points. A lot of individuals believe that the game originated from Russia, and later on, became famous worldwide.

Yet another extremely popular card game, Blackjack is one of the games that you can never get tired of. You will need a bit of chance and luck to play it, it can be played with up to eight decks, and it needs at least two to six players. This card game is perhaps the most competitive one – and keep in mind you will not be playing against the other people, but the dealer.

This game does require a lot of strategic thinking and if you are not so good at it, you can pull a prank on your friends. The prank does require a little planning, but once you have planned it right, everyone will think that you are a master blackjack player. It requires you getting a marked card set and by doing so, you will be able to perfectly execute your plan. Check out markedcardsmall.com if you want to see what decks you can opt for.

Originating from Venezuela, Crazy Eights is a game that requires 52 cards and it will require a little brainstorming and training, especially if someone never played the game before. Like every other card game on this list, Crazy Eights also has different variations, hence, you can find a variation that you enjoy most, and play it with your own style.

If you are up for a challenge, you can play the most popular type of Poker which will require you to do even more psychological and mathematical calculations. Like Poker, this game also requires betting and the play who has the best combination wins the round – and the winner gets to take home all the winnings.

In this game, players have the opportunity to bet four times, and this is what makes the game more difficult and complex than poker. As the name implies, this card game has evolved in Texas during the 1900s and later spread to the rest of the world.

Gin Rummy is only one form from many Rummy game types, however, this one finishes faster than the other ones. Firstly, the people participating in the game will get 10 cards each. The players will need to make combos and runs by getting rid of unwanted, useless cards.

People can then either make a set of three cards with the same ranks or they can make a set of four cards in sequence of the same suit. When it is your turn to play, you can either take a card from the unused pile or from the last card played pile. The cards that are flagged as unwanted are referred to as deadwood and they contribute to the points you have, however, the goal is to have no deadwood points.

We did mention the hardest card games, however, it is also important to mention the easiest one that requires no skills to play. The only two things you will need for this game is two people and 52 cards. You can start the game by shuffling the deck and splitting the cards between the two people – which means that each person gets 26 cards.

Then, each player puts down their cards, which is what starts the “war” with the opponent you are playing against. At the end of the game, the highest number wins the round.

As you can see, there is a wide range of card matches that you can play and enjoy with both your family members and friends. So, now that you might have gotten an idea of what you can play, do not waste time and opt for a card game that will make you get-togethers more interesting and fun!

Previous Who Is The Best Professional Poker Player That Has Ever Lived?
Next 5 Biggest Online Poker Wins of All Time